No Safe Place: crimes against humanity and war crimes perpetrated by high-level Israeli officials in the course of ‘Operation Protective Edge’ 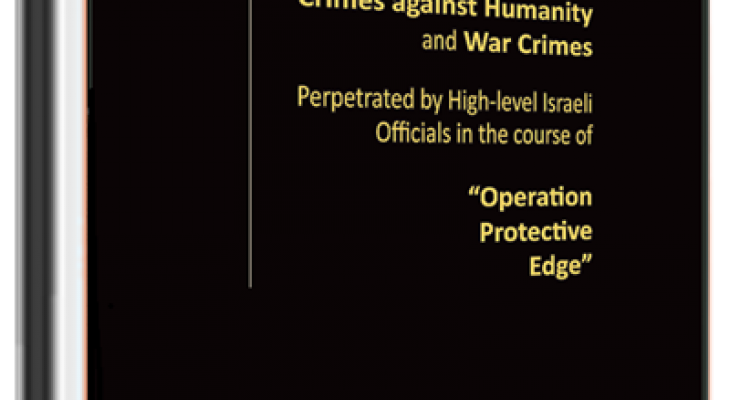 The BADIL Resource Center for Palestinian Residency and Refugee Rights announces the release of No Safe Place; a report based upon BADIL’s formal submission to the International Criminal Court, delivered to the Office of the Prosecutor in February 2016. No Safe Place provides a damning indictment of Israeli acts and policies employed during ‘Operation Protective Edge’; and concludes that high-level Israeli officials were culpable for both war crimes and crimes against humanity in the context of this operation. Protective Edge - a 50 day military assault directed by Israel against the Gaza Strip and its population - left more than 2,250 Palestinians dead, and almost 170,000 Palestinian homes destroyed or damaged, leaving 108,000 Palestinians homeless. The Gaza Strip’s sole power plant ceased operation following Israeli airstrikes. 17 out of 32 hospitals were damaged, with six closed down as a result. Out of 97 primary health centers monitored for damage and closures by UN bodies, four were completely destroyed, while 45 sustained damage. Palestinian agricultural infrastructure suffered damage to the tune of $550m.

This staggering level of death, injury and destruction naturally produced mass forced displacement of Palestinian civilians on a vast scale, and at the height of the violence roughly half a million Palestinians were internally displaced inside the Gaza Strip, accounting for 28% of the enclave’s total population.

With forewords from Professor Richard Falk and Dr Michael Kearney, No Safe Place draws upon 90 interviews conducted by BADIL with Palestinians displaced during Protective Edge, and locates this displacement within the appropriate frameworks of international humanitarian and criminal law.

As such, the report sets out in vivid detail the wide range of policies and practices deployed by Israel which, contrary to international law, forced Palestinians to flee their homes and communities en masse, including Israel’s active targeting of civilians and civilian infrastructure. Moreover, these displaced Palestinians were provided with no safe place to which to flee. To the contrary, humanitarian shelters and civilian escape routes were deliberately attacked by Israeli forces, whilst Israel’s continuing closure of the Gaza Strip has made it impossible to conduct adequate reconstruction, with the result that, for many tens of thousands of Palestinians inside this enclave, their displacement and suffering has no ending in sight.

The report thus concludes that there exists a reasonable basis to believe that high-level Israeli officials, within both military and political office, were culpable of, inter alia, the war crime and crime against humanity of forcible transfer, and the crime against humanity of persecution. In addition, the report highlights a range of grievous structural failings in Israel’s internal investigative processes; failings which remove any possibility of these processes providing effective review of the conduct of Israeli forces and/or Israeli officials during Protective Edge.

Israel shows no willingness to address these critical shortcomings, and intervention by the International Criminal Court therefore represents the only realistic means of holding to account Israeli perpetrators of these international crimes, and of delivering justice to Palestinian victims. Accordingly, BADIL calls upon the Office of the Prosecutor, as a matter of priority, to initiate a formal investigation into the conduct of high-level Israeli officials in the context of Operation Protective Edge.