Israeli Settlements: A continuous nightmare for the Palestinian Statehood

Shortly after militarily occupying the West Bank, East Jerusalem, and Gaza in the 1967 War, Israel has been colonising them with Jewish settlers in violation of international law, part of its effort to force control and prevent the establishment of a Palestinian state.

2- While actual inhabited settlements constitute only 1.2% of the West Bank area, 42% of the West Bank is under Israeli control in the service of settlers for alleged security and infrastructure purposes with the help of Israeli separation wall that isolates 13% of the overall West Bank region.

3- Although Israel withdrew approximately 8000 settlers from Gaza in 2005, it continued to expand its colonies in occupied East Jerusalem and the West Bank.

4- Today, there are upwards of 650,000 Israeli settlers living on occupied Palestinian land in contravention of international law compared to 1,182 settlers in 1972. Their presence and the location of strategically placed settlements make the creation of   a contiguous Palestinian State in the occupied territories all but impossible.

5- Up to 300,000 of the half million Israeli settlers in the West Bank live in the stretched boundaries of East Jerusalem. In addition, approximately 20,000 settlers live in settlements in the occupied Syrian Golan Heights.

6- There are more than 130 official settlements and more than 110 “outposts” (settlements built without official Israeli government approval) in the occupied West Bank and East Jerusalem.

7- According to Human Rights Watch: "Palestinians face systematic discrimination merely because of their race, ethnicity, and national origin, depriving them of electricity, water, schools, and access to roads, while nearby Jewish settlers enjoy all of these state-provided benefits… While Israeli settlements flourish, Palestinians under Israeli control live in a time warp - not just separate, not just unequal, but sometimes even pushed off their lands and out of their homes."

8- In a 2012 report entitled “Torpedoing the Two State Solution,” Peace Now, the leading experts on Israel’s settlement enterprise, documented a 20% rise in construction starts in the West Bank in 2011 over the previous year. 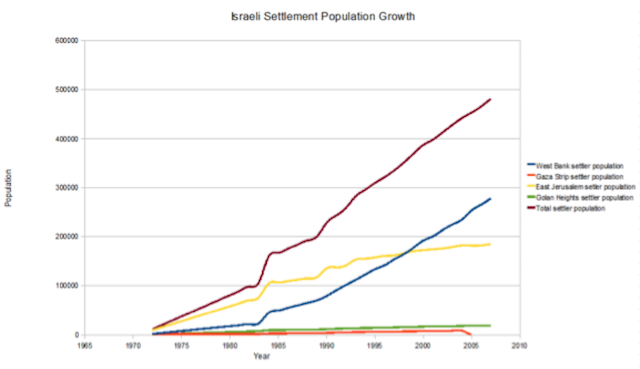 Nearly the entire international community, including the United Nations Security Council, the International Court of Justice, the International Committee of the Red Cross, and human rights organisations such as Amnesty International and Human Rights Watch, consider Israel’s settlement enterprise to be illegal. Official American policy also does not recognise the legality of settlements, although for political reasons US officials normally refer to them as “illegitimate” rather than illegal.

• Article 49 of the Fourth Geneva Convention Relative to the Protection of Civilian Persons in Time of War states: "The Occupying Power shall not deport or transfer parts of its own civilian population into the territory it occupies."

• The introduction of UN Security Council Resolution 242, which was passed after the 1967 War, in November 1967, emphasises that “the inadmissibility of the acquisition of territory by war.” The wording of Resolution 242, which is the cornerstone of the two-state solution and international efforts to make peace in the region for more than two decades, calls for the “ withdrawal of Israel armed forces from territories occupied in the recent conflict.”

• The Hague Convention also prohibits occupying entities from implementing permanent changes in the occupied territory unless it is a military necessity.

• In its 2004 advisory opinion that deemed the wall that Israel is building in the West Bank illegal, all 15 judges of the International Court of Justice (ICJ) also found Israeli settlements in the occupied territories, including East Jerusalem, to be in contravention of international law.

• International human rights organisations like the International Committee of the Red Cross, Amnesty International, and Human Rights Watch have all condemned Israel’s settlement enterprise as illegal.

• Numerous United Nations resolutions have also affirmed that Israel’s colonisation of Palestinian land in the occupied territories is a violation of international law. In 1979, the Security Council passed Resolution 446, which states: “the policy and practices of Israel in establishing settlements in the Palestinian and other Arab territories occupied since 1967 have no legal validity and constitute a serious obstruction to achieving a comprehensive, just and lasting peace in the Middle East.”

• Successive Israeli governments argue that settlement building is not illegal, however a formerly classified document dated September 1967 shows that the legal counsel to Israel’s Foreign Ministry at the time, Theodor Meron, advised the government of Prime Minister Levi Eshkol that “civilian settlement in the administered territories violates the explicit provisions of the Fourth Geneva Convention."

Israeli armed settlers used to commit brutal aggressions against Palestinians under the official Israeli protection in the occupied territories. In 2014 alone, 736 abuses were recorded involving violations against civilians, agricultural lands, livestock, and property.

The violations are divided as follows:

As for the ranking of Palestinian cities suffering Israeli settlers assaults, Jerusalem tops the list (283 violations) followed by Hebron (131), Nablus (130), and Bethlehem (101).